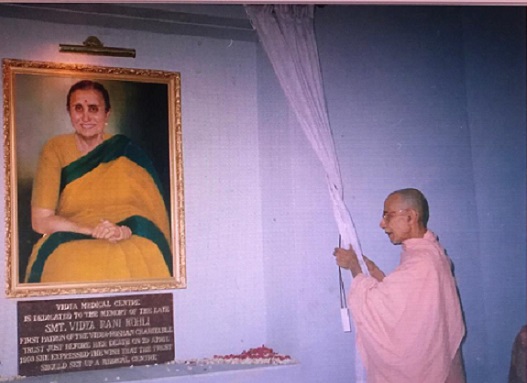 Vidya Roshan Charitable Trust was constituted by a group of professionals and was registered in 1992 under the Indian Society Act.

Vidya Roshan Charitable Trust’s (VRCT) vision is to bring about social change and provide services to the most marginalised communities like underprivileged girls, women and elderl in areas of Health, Education, Gender Equality, and Women’s Empowerment. In this connection, VRCT since 1996 has been making interventions in a variety of activities like setting up a Medical Centre, taking up projects for integerated Development of Adolescent girls to improve the status of the girl-child, it simultaneously works for Women’s Empowerment and promotes economic self reliance amongst women and girls by providing vocational training to girls and women and assisting them to set up their own income generating ventures by providing interest free loans. In 1996 VRCT started its operations from village in Guergaon district, Haryana. From its own resources it constructed its own building in one acre plot withwhich now has 19 r

In our target area 72% beneficiaries have migrated to Gurugram so there is mobility and families move from one place to another in search of employment this results in our beneficiaries not been constant, further because of our intervention, about 25% women after achieving self-confidence and sometime training they start earning a livelihood consequently they don’t attend activities of project regularly. We have started activities for women in 16 new areas.

The headquarters of VRCT’s activities is Vidya Medical Centre, Village Basai and its surrounding villages and areas of Gurugram District.

They live in clusters in one-room tenements, with one bathroom for ten to fifteen families with poor hygiene and sanitation conditions and in some places at times drinking water is contaminated by sewage. They lack proof of identity and have low acceptability amongst the local population.

Women, Girls and the elderly from the poorer strata of society living in the target areas. VRCT through its various activities will cover a population of 53,000 in the first year and 58,000 in the second. These figures do not include the patients of Vidya Medical Centre, Trainees of vocational courses and those attending an adult education Center which will be approx., 25,000. Out of the total beneficiaries approx. 75% are migrants from UP, Rajasthan, Bihar, West Bengal, Assam and Tamil Nadu. Their family occupations are Factory workers, Labourers, Hawkers, Security Guards, Domestic workers, Carpenters etc.

The Vidya-Roshan Charitable Trust (VRCT) was established in 1992 and registered in 1995 and since then has been working for the poorer sections of the society, in the Gurgaon district of Haryana. Though the State of Haryana is high on economic development as per-capita income but the social indicators of the State, in contrast, are very poor. The sex ratio of 879 women for every 1000 men is extremely adverse. In the Gurgaon district, 55.73% of girls have never attended school or have dropped out. Alienated early from the educational system, this group is largely involved in domestic labor and helping their parents to earn a livelihood. At an early age, adolescent girls have to attend to their siblings and attend to household chores. This is probably the single most documented reason for the girl child becoming a school drop-out. Other social practices like dowry and domestic violence only worsen the already low status of women in the State.

VRCT is consciously working for the poorer strata of society with the focus on the Girl-child and Women. It is presently carrying out the following activities – Vidya Medical Centre, Adult Functional Literacy classes, Vocational Training classes and a project for the promotion of education, gender equality and Women’s empowerment.